I want my Ruby on Rails Rspec tests to be as clean and simple as possible. If there is a command in rspec that can test something in one simple line, then I do not want to use two lines.

Here is a real life example I came across today:

This will work, but it also uses two expect calls. I dont like this, since if the first one fails, we wont get to the second. It feels like we are testing two things at once. Luckily, there is a very clean way to test the Rspec expects to change the record value in one go:

Now we are testing both the precondition (trashed == true) and the result (trashed == false) in one line. The important thing to note here is that the change with curly brackets is a lambda, that will get called before and after the lambda given as expect clause.

What about testing multiple values this way? Say we have two records, and we expect both of their values to change:

Now we are explicitly saying: “Both spe1 and spe2 should change their trashed? value from true to false”.

Do you want to have better specs and and easier time programming? I recommend you read Effective Testing with RSpec 3 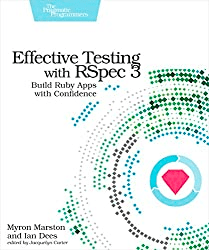